The 2021 Nissan Sentra is an excellent option for a modern sedan. However, Honda and Toyota also have similar options. Let’s compare the three and see how they stack up against each other.

As you can see these vehicles are pretty evenly matched! (Except for the Nissan Sentra, being down in the City but making up for it on the Highway.) Still, ultimately they all end up at 33mph combined.

When it comes to the engine, each car varies. The Nissan Sentra has a 2.0-liter Direct Injection Gasoline with a HorsePower of 149 hp @ 6,400 RPM. The Honda Civic has a 2.0-liter 158 hp @ 6,500 RPM and the Toyota Corolla has a 1.8-liter 139 hp @ 6,100 RPM. There is just a slight difference in these vehicles, but the Nissan Sentra is a good mid-ground between the Honda Civic and the Toyota Corolla! (Especially when it comes to the lower price point!)

Some of these cars will vary with infotainment when it comes to the trim model. Features like info screen, Smartphone integration, and convenience are super important when it comes to picking the right car. The Nissan Sentra’s base model offers a 7” color touch-screen display, Apple CarPlay, Android Auto, Bluetooth connectivity, hands-free texting, and much more.

The Toyota Corolla’s base model offers a 7” touch-screen Apple CarPlay, Android Auto, Amazon Alexa, Bluetooth, and hands-free capability, as well as a Wi-Fi Connect as a paid service.

However, this is where the Honda Civic falls short. The base model offers a 5” LCD screen, Bluetooth connectivity for music, and hands-free calling.

Safety is the most important feature that comes with a car.

The Nissan Sentra offers all basic safety features, but it also offers lane departure warning, intelligent forward collision warning, automatic rear braking, blind-spot warning, intelligent view around monitoring, and so much more! You can read more about these features on Nissan’s official website.

The Toyota Corolla offers the Toyota Safety Sense 2.0 this offers a Pre-Collision System with Pedestrian Detection, Lane departure, and Full-Speed Range Dynamic Radar Cruise Control. Most of these features are very similar to the Nissan Sentra.

The Honda Civic’s base model also offers similar features like Collision Mitigation Braking System, Adaptive Cruise Control, and so many more features. What a relief that none of these companies are willing to down-size safety features due to a vehicle’s trim.

These three cars are all great vehicles for different reasons! They are very similar, but all have the features that make them unique. However, the one I think is the best bang for your buck is the Nissan Sentra. It offers better highway fuel economy, Smartphone integration, intelligent safety features, a fair amount of power, and, most importantly, a lower price tag.

Come down to Stephen Wade Nissan and check out the 2021 Nissan Sentra.

Popular posts from this blog

NissanConnect: SiriusXM All SiriusXM-equipped new and certified pre-owned Nissan vehicles come with a 3-month All Access trial subscription of the service as part of the NissanConnect infotainment platform.  So, what is  SiriusXM? SiriusXM is satellite radio, but it's much more robust than standard, run-of-the-mill radio.  It boasts a deep variation of music with over 300+ channels to tune into as well as the ability to create your own ad-free Personalized Stations Powered by Pandora.  If you're in the mood for a change of pace, channels also include original talk channels and comedy channels featuring the biggest names in comedy such as Comedy Central and Kevin Hart.  With your subscription, you can access thousands of hours of on-demand shows and performances of SiriusXM video. Learn more about SiriusXM on the official Nissan website .  Go ahead and try it—you'll love it!
Read more 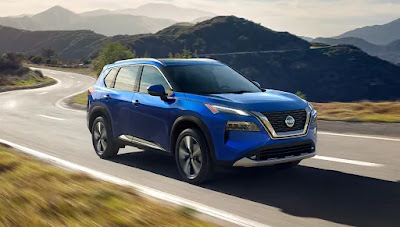 The 2021 Nissan Rogue is here and it is decked out with new features! Everything from smart device integration, multiple high-tech displays, and the Nissan ProPilot assist system is included in this top of the line car.  The 2021 Nissan rogue is equipped with not one, but three screens! One is located where you normally get your infotainment system and this display can use Nissan’s Door to Door Navigation, Google Maps, or Waze. With the digital dashboard, you have the freedom to customize the gauge clusters to wherever you want. You can also access menus and maps from the dashboard. The third screen is your heads up display, where you can see your navigation without ever having to take your eyes off the road! This not only offers convenience but also safety.   You can read more about these amazing new features on Nissan’s website The 2021 Rogue has a plethora of safety features to make you feel comfortable and secure on the road! With safety assist features like the ProPilot, just wi
Read more

How to Disinfect Your Car

How to Disinfect Your Car It's October 2020:  months later after the first major outbreak of the novel coronavirus (COVID-19) in the United States.  The spread has not yet slowed, and there is constant talk of a second wave of the virus as the weather becomes cooler and our bodies become more susceptible to becoming ill—whether it is the cold, the flu, COVID-19 itself, or another possible disease.  It wouldn't be a bad idea to deep clean your car if it's been a while since you last cleaned it, either. In any case, Nissan has written an extensive article  on disinfecting the interior of your car so you can learn how to protect yourself as well as your passengers from catching any sort of illness this upcoming winter season.  Learn how to clean car seats (leather and cloth) and other surfaces, as well as what to use and what not to use when it comes to sanitizing your vehicle.  Stay safe and stay healthy!
Read more